Awareness Hides in the Riddle of the Step Gone, Not Gone

Written on a laughable day last week. I didn’t bother to post it as is my habit these days of why bother. I’m posting for the yoga lesson included which makes none of this dated.

Trump is the president elect. Hope dies harder for half the country as he appoints each post.  Today Rick Perry was marked to run the department of energy, a department he tried to disavow with his own failed run for presidency years before.  Under the pressure of a debate he could not remember its name. He is famed for being stupid. The meanest witch that ever competed on Trump’s reality show is on his transition team.  The Apprentice was designed to pit colleagues against each other. No competitor had sharper teeth than Amoroso. Sociopathic ambition impresses Trump. So do sycophants.  Here she’s invited demented Kanye West to the Tower for a narcissist coupling with the boss. What the Hell could they be talking about in any non-acid dropping universe?

I’ve been choking on the news but this latest pile of impossible releases the catch in my throat.  I take the breath held this year long and laugh. All scenes of Trump dynasty are absurd. That is if you forget for a moment that you and your children and everyone you love will be destroyed.

Election 2016 is a collaboration of We the people.  Stage lights illuminate the terrible, impossible truth of this black comedy we created by ignorance or complicity or apathy. It took generations to get here.

Time gone is not a word called history but a void of unfinished, tangled events.

Then again it is the same day the news exposes the dire straits of Tennessee’s children. They are failing. There is nothing funny about that. Halt the rise of charter schools officials say a bit late to the game! The bulk of Tennessee’s population lives silent lives below the radar. The jewel of Nashville is worse than the rest of the state. Here in Nashville those that can, go to private schools that were the once the sanctuary of Whites against integration. It took generations to get here.

Time gone is not really gone but lies like a film of unsolved problems on the windows of our collective home.

I enter the University with a heavy heart. I have a class to teach. And a bad case of I don’t give a shit about a yoga class. Though it’s after dark I have not washed my face. I am wearing the sweats I threw on to walk the dogs this morning. The grey day lingers inside me.

I have the feeling that I no longer have a country or free will that matters beyond the choice of food I eat which is still a lucky choice compared to much of the world. That might not seem like good inspiration for a yoga class but it is.

Where is the awareness in a yoga pose? The correct movement of skin requires refinement of the senses but reflection comes in the wake. Realization comes in the limbo between forms. This seeming inaction sometimes feels like the step not taken or the slide backward. However it is here that the yoga manifests awareness in totality.

The effect of the action of the skin is clarity.  Hopefully it is the awareness of peaceful space. But strong actions in new territory often result in the awareness of discomfort. The actions seemed correct at the moment but whether clouded judgment, group pressure to perform or confusion prevailed, we are hurt or at least uncomfortable.

This reflection births the next move. When we don’t recognize the gift of that moment, we squander it. Mistakes are repeated or we fail to reap the full pleasure of good space. Either way, lack of recognition is a disservice.

The riddle is that recognition is subject to one’s past and perceptions. It might seem like a no brainer that we would recognize truth except that truth is strained through the screen of our individual experiences and subject to distortion.

How does that relate to the choice of this man for President? We’ll see. 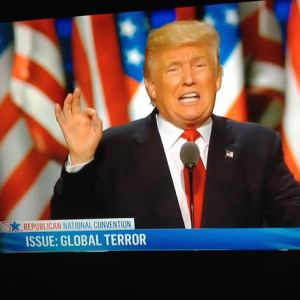 In the meanwhile, we might recognize our part in all of this. This is the step backward. It will seem to be gone with the next one forward, but that is an illusion.